The other day Jade had her friend Gabby over.  They were so adorable and were really good about letting Ivy play with them.  For a while Ivy was doing a fashion show for them and they were judging her.  Scott recommended I set up my old camera on a tripod and let them use my make-up. 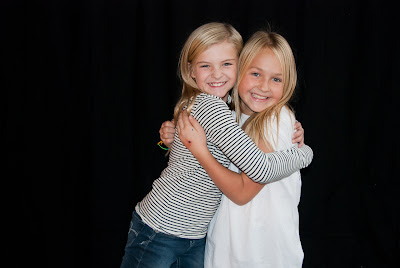 I did not expect this as the outcome…. 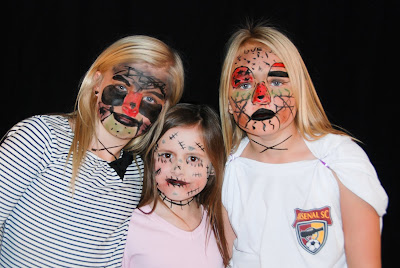 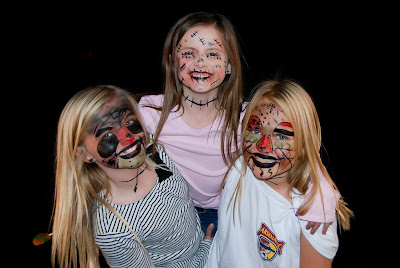 But they sure did have a blast!
And I really can't get over what an amazing job Jade did on Ivy.  Scary! 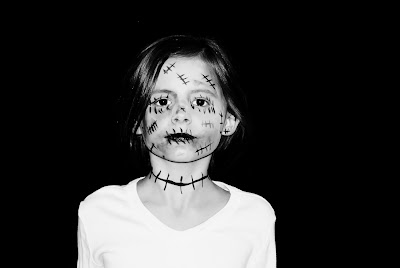 Crystal Hot Springs in the Cold

Have you ever been crazy enough to go swimming in an outdoor pool in the middle of a snow storm or the morning after?

We make it an annual tradition.

Crystal Hot Springs in Honeyville is a natural mineral hot springs resort.  There are water slides, lap pools and 3 very hot tubs and a pleasantly hot pool.  The only pictures you will see from our winter visits of the hot springs is from inside the water.  Cause it is WAY too cold to stand around snapping away.

This was the first time Jade did the water slides and she loved it.  Ivy just has a blast hanging out and playing in the water.

This year we went with our friends, the Ridings.  Scott's parents also joined us a little bit into the soak.  It was wonderful to just sit and visit without feeling like there were other things we needed to be doing.

A couple quick pointers - 1) Don't wear a white swimsuit.  The minerals can stain it yellow.  2)  Make sure you rinse off really well after or you will be itchy.  3)  Bring a bottle of water with you otherwise you will get dehydrated.  4)  The kids LOVE getting an ice cream.  Really, who wouldn't think it was cool to eat an ice cream outside in the snow while swimming? 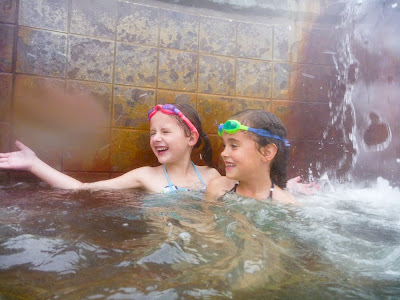 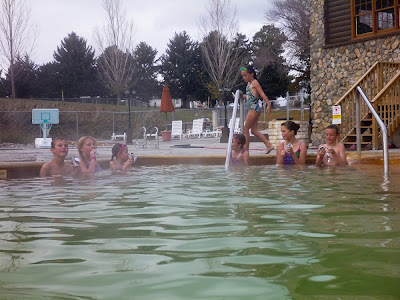 The First Real Snow of Winter 2012

Some say this is going to be a mild winter.  With our first real snowstorm being the 10th of November there is definitely the possibility for a heavy or a mild winter.  I'm crossing my fingers for a heavy year with lots of snow days.  Those are my favorite kind of days.

We had our first day of snow up in Brigham City.  As it turns out being further north than normal did not mean we got more snow.  In fact, my parents got almost a foot in Orem.

The girls had a blast playing in the snow after Jade got home from duck hunting.  Somehow neither one of them minded that they didn't have snow pants or good boots. 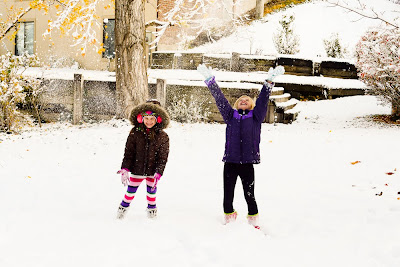 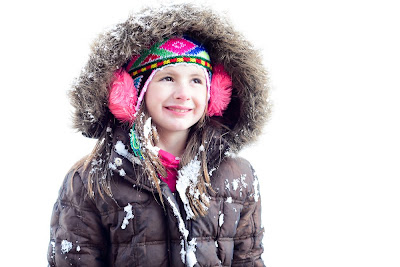 The alarm on Scott's phone was set for 5:25 am.  The clock on the nightstand hadn't been changed for daylight savings.  I woke up and looked at the clock and it said 5:30.  I waited a few more minutes just in case Scott had changed his mind about how much time they needed.  Five minutes went by and no alarm.  So being a good wife, I asked him what time he needed to get up.  He looked at the clock and said in a panic "10 minutes ago!" and then looked at his phone and with a yawn said "or in 50 minutes."
Oops - not a great way for me to start the early morning.
25 minutes later, Jade comes in and says, "Mom, don't we need to be leaving?  It's nearly 6 o'clock." - Guess she was pretty excited to get to go duck hunting with dad. 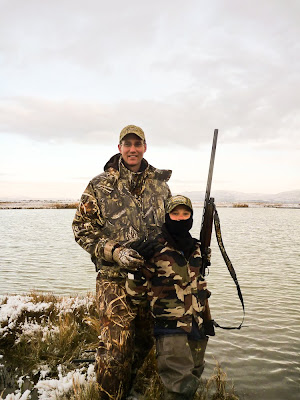 They went to the motel and picked up Jason and Topher and headed out for their cold 30 degree morning in the water. 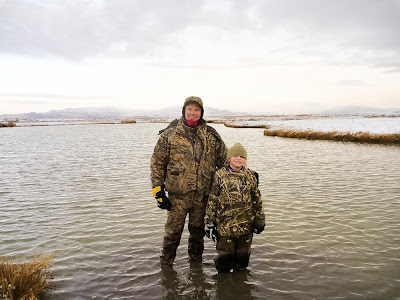 They saw a duck.  Scott shot at him.  They didn't kill or injure any ducks at all. 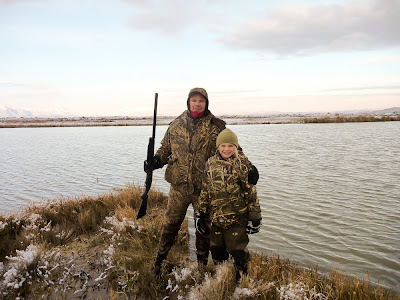 The only mishap for the morning was when Jade was telling Jason a funny story and was acting it out and fell into the water.  Her waders are only thigh high so it meant they filled with ice cold water.  She tried really hard to be a big girl and not cry but darn it, that was some cold water and they had to practically hold her upside down to drain her waders.  In the end she had some crocodile sized tears and a great story to tell. 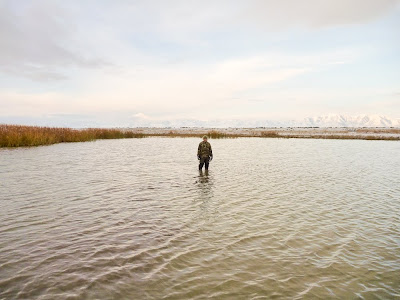 The four of them had a great time and they are both excited to go again.  I'll still keep my fingers crossed that there are no duck casualties.

Leaves before the storm 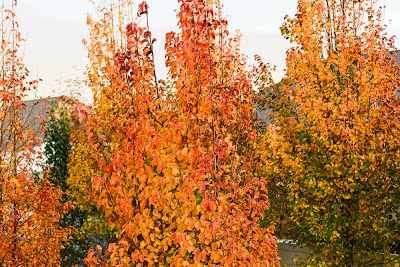 The leaves have not wanted to fall from our trees.  Which means I have been lucky to have a beautiful view for weeks.  My favorite time is at sunset (or the golden hour) because the leaves are spectacular.  But we knew it would have to come to an end at some point.  We live in Utah - so it was bound to happen sooner or later. 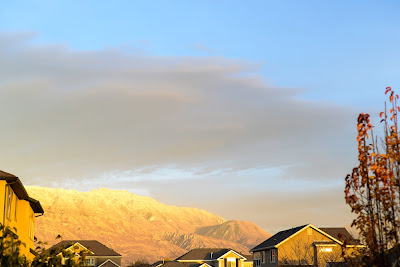 The forecast for the weekend said it was going to storm and that the wind would pick up the day prior to the snowfall.  Which for us would mean all of the leaves would fall at once and we would have to gather them in the dark. 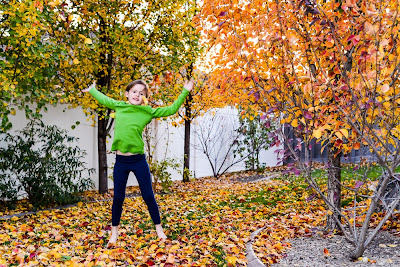 I took Ivy out to play in the leaves for just a minute before it got too dark and too cold.  Funny little girl can find joy in the littlest things.  That is one of the things that I love about her. 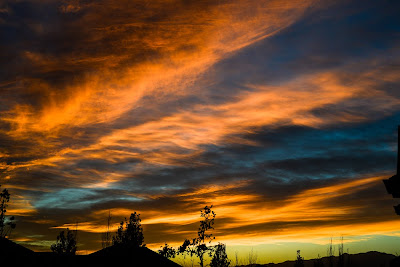 Pretty soon it was too dark to capture her playing (even with the flash, a high ISO and a slow shutter).  But we were left with an absolutely beautiful sky.
Scott got home just after this beautiful sky faded to black.  He and Ivy went back out to the yard and gathered leaves by the light of the our two small outside lights.  She had a blast and we don't have too many soggy leaves now that the storm has hit.