There is nothing more satisfying than two beautiful girls with great big smiles on their faces after Christmas morning.
Jade had probably the best night of sleep she's had in a long time. So much so, Scott had to wake her up at 9:30 so that we could open presents and get on our way to Grandpa and Grandma's house. I took the traditional picture of the kids sitting on the stairs waiting to go down to see what Santa brought. Then we made our way into the family room to do stockings. Ivy was so excited about her doll that her mouth was open long enough for me to get several very cute pictures. Jade was most excited about "Hairspray" and just beamed when she opened it. Now for a little background. Jade and Ivy have been asking for a dollhouse from Santa. (Okay so they were totally coached!) We've also been mean parents and threatened to tell Santa that they didn't get a dollhouse because they weren't being very good. So Christmas morning after the girls had opened their stockings, I asked Jade if she got anything else from Santa. She sweetly replied that maybe she just wasn't good enough. So we said she'd better look around the house and see where Santa would leave a dollhouse. Scott sent her to the garage, while I got in position to catch the excitement. Sadly, I missed the perfect picture. But the memory will have to do. She rounded the corner into the playroom and her jaw dropped to the floor and she started backing up with a "no way". Hand up at her mouth, with her jaw still dropped, she made her way into the playroom. Ivy rounded the corner and just said "wow" as many times as she could. They loved dollhouse.was most excited about "Hairspray" and just beamed when she opened it.

After we opened up presents at home, we headed down to Grandpa and Grandma's house for the family exchange. Santa got the Andrus boys RockBand- so we pretty much played that all day. I'm really really not good at it, but it was a lot of fun anyway. Tom and Anne gave Ivy an adorable hat. If it wasn't for the food on her face, the pictures could be in a Gap ad.


Christmas was a great day and very satisfying, BUT very tiring too. For the past year and a half, Jade has been taking gymnastics at All American in Lindon. She has gotten really pretty good. We have 3 exhibition meets since the time she started. It's very fun to see how she has progressed. Her latest teacher, Jessie, is fantastic for the girls. She's really working on form. Since she started with Jade, Jade's cartwheels have perfectly straight legs and pointed toes. She can also do a backbend into a walkover and she's learning out to do handstands on the beam. Most Importantly, Jade LOVES it!
We tried to do a combination dance class. I think she was really good at it, but apparently some girl was mean, so she decided to quit. It makes me really sad, but one day, she may decide to take it again. This past fall Jade started pre-school at Learning Dynamics. I don't love her teacher but I'm really glad she's learning. She has started to read and therefore write. Yesterday she was trying to write, "Lukie, I love you" and she was writing "love" she went through "LLLL" wrote it, "uh, uh" and said "U". Some spelling rules are a little difficult for beginners. But I'm really excited that she is making an effort.
Shared by Unknown on 12/16/2007 08:50:00 AM No comments:

To try and to fail- or maybe succeed

Every so often we try something new. Something that we don't think we are going to be any good at, but we try it anyway. As my mom has recently addressed, our family doesn't do things unless we know that we are good at them.

I think I'm a little different than the rest of my family, because I have done a lot of things that I have found out that I'm really not good at. Take singing- after a year or so of voice lessons, I decided that it just wasn't part of the path I should take. Maybe it was all of the jokes about "Hit Me with a Hot Note" that steered me away from it. Or because I would yawn uncontrollably anytime I did classical training. Either way, I know I'm not good. I could continue telling you things that I have given a fair try, only to fail, but I won't.

This weekend I tried something that I was not very confident about. Scott has wanted a large tree in our entryway. He decided last year before Christmas that we needed a "decorator tree" to fill up some of that space. As I am not a person that can buy things full price, very often, I started shopping for this tree during the after Christmas sales last year. I got some great sprays and balls at Pier1. (This year they are really limited in what they have for Christmas decorating). Anyway, I ended up using several of those balls and sprays on my 7 1/2 foot tree in the family room. (The non-decorator tree with ornaments from many years of collecting). This year, I waited for Interior Elements to have their Christmas sale. (That's going on right now- 30% off!) What fun stuff they had and I managed to get a 9 ft Imperial Slim tree for $175. Okay, so the tree isn't ideal. It's one of the wider slims, but it's fine for the money. I got the tree and some decorations home Friday evening and started setting it up. Boy did it need a lot of fluffing. Scott got home from work and wasn't blown over by the bare tree itself, but "all Christmas sales are final" so I had to make due. I started decorating and was done - for the most part- in time to play Ghost Recon (another thing I don't do well). 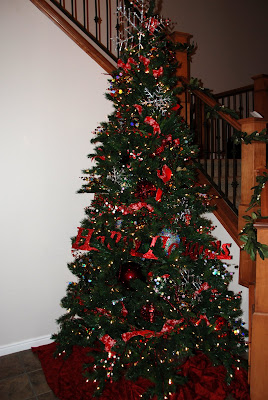 I tell you this because I am actually really pleased with how it turned out. I still have the ribbon to do and the tree topper, but I need to go and get green pipe cleaner, some firm wire and some floral tape. Monday morning I'll run to Michael's or Robert's to get that stuff. Then I'll finish up the tree when I get back from Raleigh.

I guess I'm not the only one excited about the new tree. Jade said, "Mom, this tree is much better than the other tree. I mean look at that one and then look at this one. It's just so much prettier and has all of this stuff on it."

I'm really glad I tried it, even though I wasn't so sure I could pull it off. I'd hate to try to make it look "decoratorish" and have it turn out like the "other tree". Although, I do love the "other tree" and each ornament means something special to me.