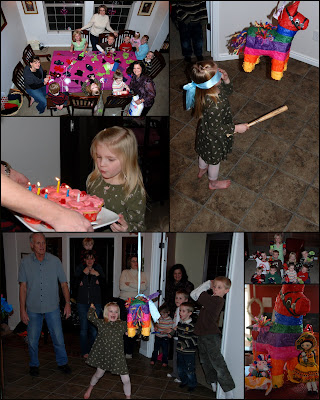 Jade had quite a fantastic birthday. It started on Sunday the first, otherwise known as Super Bowl Sunday. We decided to combine her birthday with the Super Bowl festivities. Jade was okay with it, in fact I don't even think she knew there was a game going on. The first half of the game, the kids played Wii upstairs in our bedroom. At half time, we started the birthday party. Jade wanted a "Spanish" party with a pinata. For dinner we had tacos. While everyone was still eating, Jade opened up her presents. She loved everything she got.
Then the game was back on and the kids made their way back upstairs to play Junior Clue.
After a while, we gathered the kids and started the craft. Here is the background behind the craft... About two weeks ago, Jade and I were talking about her toys. I mentioned that there were some kids who don't have toys like she does. She then asked me if we could make dolls for some of those kids. I asked her if she wanted to do that for her birthday party. So it was decided. We made dolls for her birthday.
The craft went over very well. I had cut out a bunch of dolls and sewn them together. Then everyone got to decorate them and stuff them. I was a little nervous that the kids would struggle with not getting to keep the dolls. Surprisingly, they almost all handled it very well.
Once we finished the dolls, we did the pinata. Zurcher's has some great pinatas, but they are so hard to break. It took so many hard hits before it finally broke.
Fifty seconds before the game ended we sang Happy Birthday and ate cupcakes.
Then we all gathered around and watched the fantastic ending to the Super Bowl. Go Steelers. 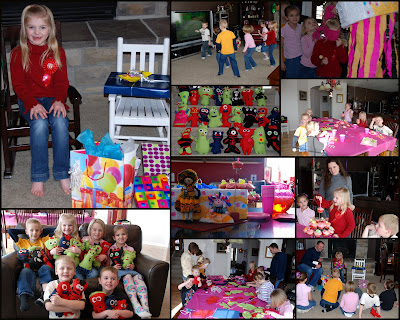 Then on Saturday, we had her friend party. We started out making ugly dolls. Each child made 3 each and got to keep one of them. The cute kids had a blast doing them. After the dolls we did presents. Jade was so excited about her presents. Once we did presents, we moved on to the pinata. They had to hit it as hard as they could a million times! Finally Scott helped it break and they dove for the candy. Everyone had their little piles of candy, but half of them forgot to take theirs home. Funny kids. Happy Birthday was sung by the adorable children's choir. Then the cupcakes were gobbled and mangled. While we waited for the moms to come and pick the kids up, they danced and danced to "The Gummy Bear" song.
The party went well and I hope the kids had a lot of fun.
Happy 6th Birthday, Jady Bug. We love you!
Shared by Amy on 2/10/2009 10:29:00 PM

What a joyous birthday celebration! It was a great idea to make dolls to give away-- thinking of others is never a bad idea! The pictures show that Jade enjoyed every minute of her "special day"... or "special weekend"! Lots of love to the birthday girl!