Our first night in Anaheim

Sunday evening, we arrived at our hotel in Anaheim. We unloaded our many bags, pillows, stuffed animals and grandpa's water machine. The girls climbed up and we headed to our rooms. We were lucky enough to get connecting rooms. 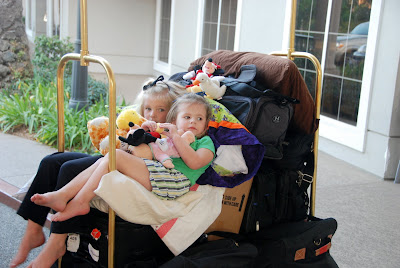 After we checked in and got a little bit unpacked, we headed to Downtown Disney for dinner. I've been to Downtown Disney in Orlando several times, and it is a very fun, kid friendly place. There you can get candy at the Goofy Candy store, climb on large Lego's and shop at the big Disney store. The Downtown Disney in Anaheim, is not so friendly. There is only one place to park and then it is quite a walk to get to any of the stores. The Disney store was the farthest store from the parking lot. The restaurants were packed and had 45 minute waits. It was not what I had expected. Unfortunately. 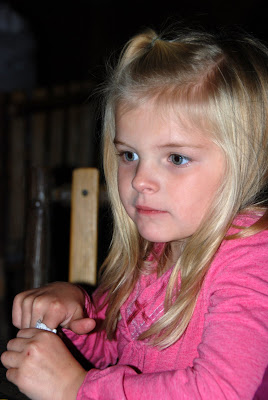 The girls had a great time at dinner. Grandma let them eat sugar from the packets. Luckily, both of our girls still ate lots of salad and a healthy dinner, despite the sugar packets. 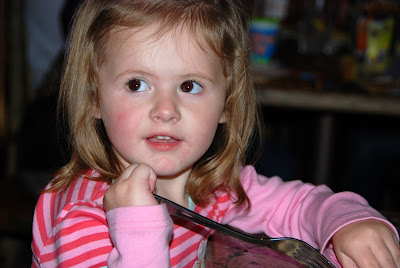 After dinner, Jade got in trouble. We're having some challenges with her lately. She tends to act like she's a teenager and throws tantrums equal to ones I only expected in 8 years. It was so cute. I know thinking it was cute is not the right response, but here's why... Once the tantrum was over, we talked about it. She said she wanted to "SQUASH that" (and she punched her fist into her other hand several times). What that meant was that the behavior was all gone and we should never talk about it again. We learned that when we brought it up the next morning. She got all teary and said, "I squashed that, it's all gone." And it really was all gone. She was great the rest of the trip.

We try really hard to learn from the girls so that we can become better parents. That tantrum and the squashing the behavior really helped me. Now, when Jade does something that we don't like, I say, "Jade, I think we need to squash that behavior." Then she says, okay and punches her hand. I love it. And it works! CRAZY.

Good for you for listening to Jade's solution to her unacceptable behavior! She's a smart little girl with wise parents. The photos of the beach, the cousins having fun together and the and girls' arrival in Ahaheim are terrific "journal entries". We can't wait to see Disneyland!

I'm loving all the pictures....can't wait to see the Magic Kingdom!