A dad and his boys, I mean girls

After we spent the weekend in Yellowstone and Scott was remembering all the fun he used to have with his dad and grandpa hunting, he decided it was time to teach his girls how to shoot. 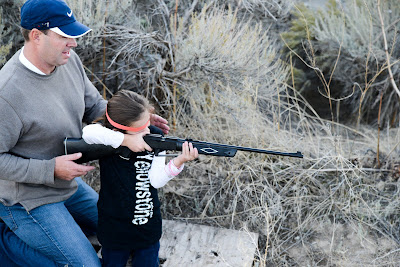 We went to Cabela's and found a pellet/bb gun and found a location near by that would allow us to shoot at targets.  (Shooting a pellet gun is different than shooting a real gun because the pellet is shot with air instead of gun powder).  So we headed out to the other side of the lake for Family Home Evening. 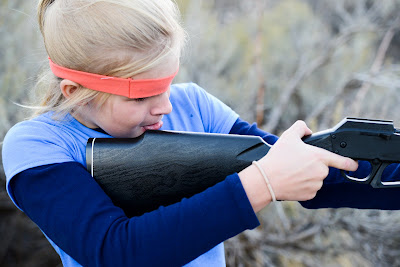 I was really impressed with how well the girls did.  They both struggled to keep one eye closed so we were glad to have the work around of an orange headband our stylish younger one had worn.

It wasn't easy getting them to feel where to hold it against their cheek and there were times the gun was more resting on their shoulders but eventually they caught on. 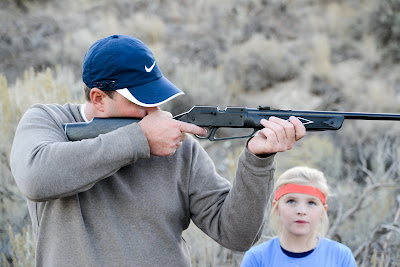 We all took turns and had fun racing up to see if we'd hit anywhere on the target and were always thrilled when we actually nailed it.   As you can see below, we hit the apple a couple of times, tore through the can and grazed the yogurt bottle.  But we have several hits on the wood.  Which, in my book is pretty darn good. 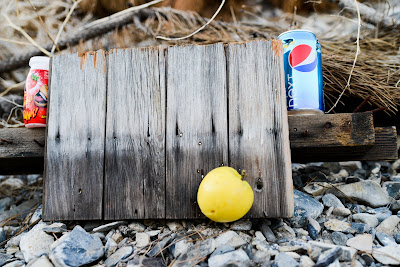 The kids loved it and are looking forward to going out again.

Email ThisBlogThis!Share to TwitterShare to FacebookShare to Pinterest
Labels: Activities