I don't know why I keep waiting to post about the movie. But, I think it's time I post it.

A large group of women from our neighborhood and ward, gathered at Thanksgiving Point for a 12:01 showing of the much awaited movie. Many of the women were all decked out and glittering. The women that put it together were all dressed up in gorgeous long black velvet capes. They also did trivia questions and raffle drawings. I was very impressed with all they did. The theater also went all out for the opening. They had hired actors/models to come and greet the movie goers. I didn't get there in time, nor did I take my camera (shocking- I know!) So, I'll just jump into my review...

I went to the show, expecting it to be a two star show. With that expectation, I was definitely pleasantly surprised that I enjoyed it as well as I did.

The first scene left me skeptical about how I would like the actress they selected for Bella. By the time she got to Forks, I was liking her. Charlie was not what I expected, but I liked him. Bella's friends were a little too "cool" and "hip" for such a small town.
Now let's talk about the Cullens. UGH- I really struggled with most of them. Emmitt was cast very well, but they made him a little too goofy. Rosalie was far from what I expected. I wanted a tall, super skinny, dark haired elegant beauty- instead we had a bleached blond who wore silly too tight of jeans. I decided to check out the actress- Nikki Reed. In real life, she is strikingly beautiful and fits more what I expected of Rosalie. Alice was fine- but they didn't develop the relationship between her and Bella at all. Jasper- UGH UGH UGH. He was awful. By no means the fighter that I envisioned. Plus, the actor looked like he was constipated the whole movie. I know that he is a troubled soul- but poorly done. In my mind, he should have been a large, intimidating hottie. Someone that his power would actually help on the hunt. Carlisle was fine but his make-up was AWFUL!!! Esme was perfectly cast. (I really miss her TV show- the Ex List). 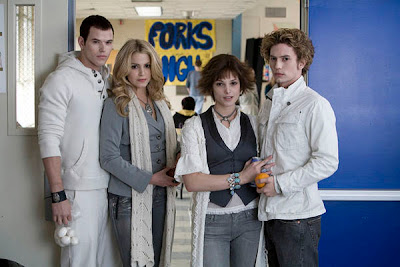 Now on to Edward. His hair was goofy, he was too hairy for Edward and his animal like stance was silly. The other night he was on Jay Leno, and I have to say that any charm he had was lost in that interview. In the interview he was a freak- really. In the movie Edward and Bella had good chemistry- but not as good as Troy and Gabrielle from HSM. (Sorry, had to throw that in;)) 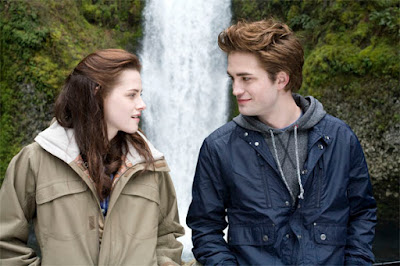 James and Victoria were wonderful! 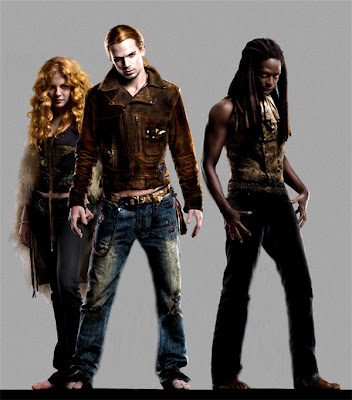 The last character, I'll give my opinion on is Jacob. Have any of you seen "The Adventures of Shark Boy and Lava Girl"? It is one of Jade's favorite movies. We've watched it over and over again. Jacob was Shark Boy. The problem was that he seemed too old. But, we'll see how he does in the next movie.

I enjoyed the movie. There was one particular scene that I absolutely gagged at. It almost ruined the whole movie for me. I will just let you see the movie and see if you can figure out which scene it was.

Was it the scene where Edward and Bella were laying in the grass staring at each other for what seemed like 5 hours??? Did you read my review on my blog? :)