Well, based on the number of posts, you can tell we had quite the day. And I forgot to take pictures at three of the festivities we attended.

Got up and got vamped.
Took lots of scary pictures
Went to Jade's Halloween Party
Went to work and the girls had lunch
The girls came up to my work
We Sped to Scott's work
Went to Grandma and Grandpa's early for the party, but had some nice one on one time
Went to the Christensen's ward activity that Cass was in charge of. While we were there, the girls did some trick or trunking, danced the Chicken Dance, learned YMCA and the Hokie Pokie, and joined in their parade
Went home and Kat came by with the boys (Jon counts as one of the boys)
Scott took the girls Trick or Treating and I stayed home to hand out candy
Put the girls in the bath
Went to bed 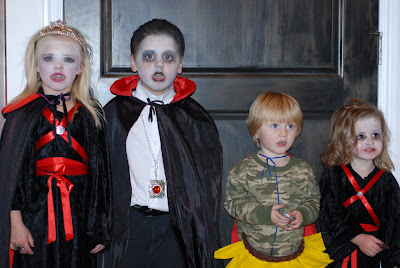 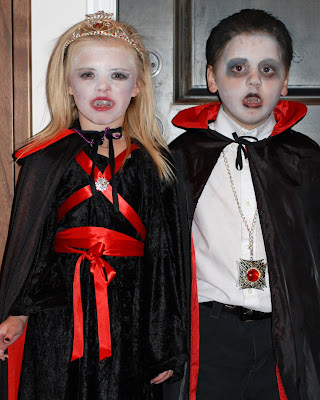 Talk about scary vampires. I think the teeth were not the best addition. But, for 89 cents, they were probably worth it to her.

HAPPY HALLOWEEN and we'll see you next year!