Jady Lou Who and the other Who's in Whoville

The girls are in bed and we're tired, so I decided it was a great time to try and get caught up on a bit of blogging.

Jade's kindergarten class did an adorable production of "The Grinch". They dressed as "Whos" and sang in front of a sign that said "Whoville". Thanks to this fantastic show, Jade can belt out a powerful rendition of "You're a mean one, Mr. Grinch" and her sister does her best to sing a long.

For the show, we did Jade's hair with a cup holding it up. We sparkled her face with my favorite MAC glitter, lined her eyes just right and mascaraed just the outside corner lashes. (Because that's what they did in Jim Carey's version of Dr Seuss's Grinch). Of course she requested a quick photo shoot before heading off to school. 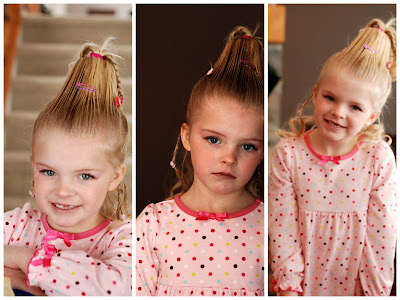 The "Whos" were sad, you know, but only for a minute and then they were taken by the spirit of Christmas and smiled from ear to ear. 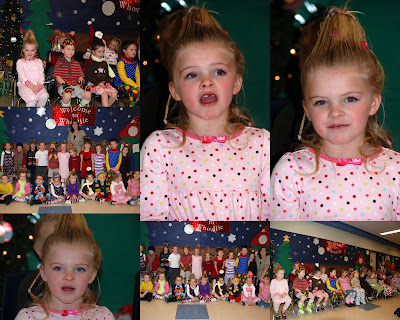 And here they all are. What a great job her teacher and her music teacher did. 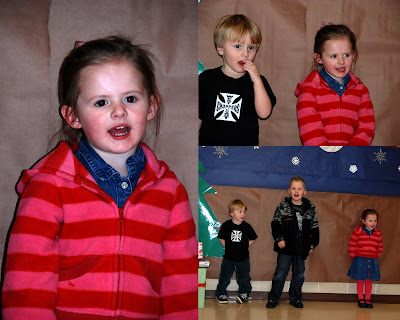 After the show, Ivy gave her own show and was joined by her cousins. The first picture of her by herself was taken during a completely spontaneous singing of "Santa Claus is Coming to Town" with hand motions and all. All of the parents that were still around stopped and listened to her sing and applauded her for her strong performance. Luke and Harrison sang with her for a song or two.
I'm so proud of my girls and the great jobs they both did at Jade's show.
Shared by Amy on 12/25/2008 10:01:00 PM

I think you have TWO "whos"! Nice that the cousins could join in.

I think you have TWO "whos"! Nice that the cousins could join in.