We have a mouse problem...

I got a text from Miss Kim telling me that a mouse had come out of the fireplace. Another time I got a text telling me one had just ran down the stairs. Then another came telling me that a mouse had run from under the fridge into the pantry.
I hate mice. They creep me out.
So Scott got several mouse traps and we waited. The first night we had the traps set, we were all sitting in the family room watching a show, when we saw a little mouse running really fast behind the TV. I jumped on the couch and the girls followed me. Scott blocked the mouse from running away and the trap went snap. I screamed so the girls screamed. Then we scampered upstairs and hid.
Jade decided she had to see the mouse but she remained scared.
Since that first mouse, we have trapped 6 of them. I think we're free of mice for now, but we will have to find out how they are getting in and block it off.
The girls won't go into the bathroom by themselves because they are afraid there might be a mouse in there. In fact one night, I had to go and turn on the lights at 2 am for Jade.
We can't continue with the girls being scared to do anything, so Scott came up with a really great idea. He took us to the PetsMart to hold a mouse and get past the fears of mice. It was a lot of fun and the girls decided that they really really want a guinea pig and are adding it to the Christmas list.
Are they still afraid of mice? Will they go into a dark bathroom by themselves? Yes- still afraid and no- won't go alone. Sigh, it was a great idea and maybe we'll have to try it again. 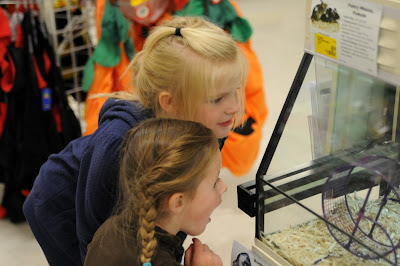 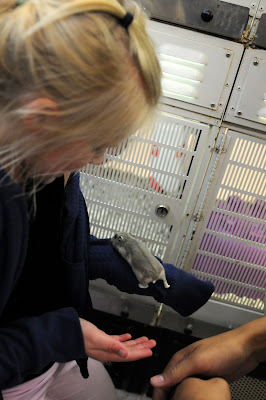 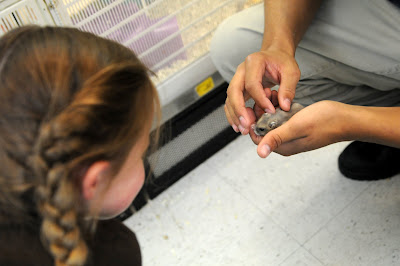 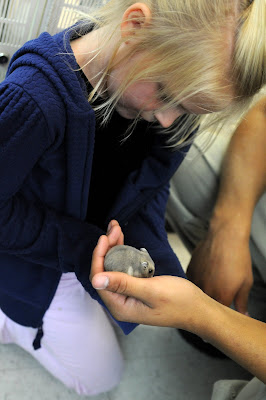