I am amazed at the strength that this little girl has. She knew she was going to the hospital and she knew that they were going to cut her. She never once acted afraid. I'm sure she was nervous, but it never showed.
The day before, I was giving her the run down and told her that she might be pretty grumpy when she first wakes up from the surgery. She told me not to worry because she never wakes up grumpy. I reminded her that her throat would really hurt, and she sweetly responded, "yeah, but you'll take care of it so I'll be okay and I won't be grumpy."
Right before she went into surgery, she let the doctors know that she wasn't going to wake up grumpy. They raved about how sweet she was to the nurses. 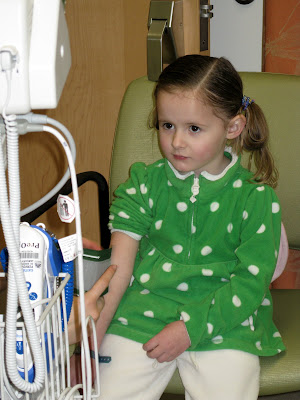 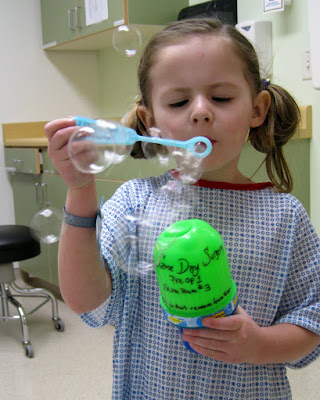 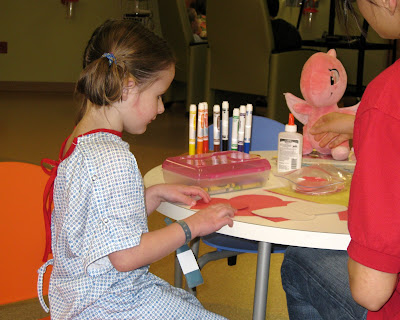 Once again, I was absolutely thrilled with Primary Children's Hospital's Riverton Out-patient Clinic. They were quick, they were caring, they kept her busy and they all genuinely cared.

I know they really cared, because after the surgery, Ivy woke up- not grumpy- but wanting a Barbi she had played with in the waiting room. The nurse found someone to go and get it, but they forgot her brush. The anesthesiologist went out and found it for her! Dr Miller was awesome with her. Dr Kelly (the Ears, Nose and Throat Doc) was also fantastic. He was quicker than he said he'd be and he came right out to visit with us. 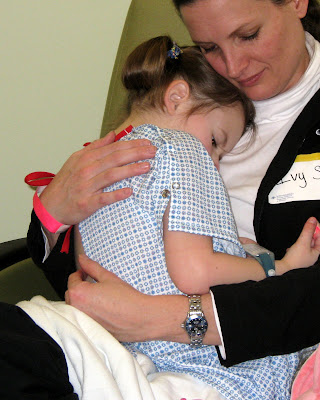 We had to be there at 9 in the morning and we were headed home before 1 in the afternoon. We would have been able to leave earlier, but she didn't want to drink anything and they wouldn't give her Lortab until she had kept a drink down. After the Lortab, they had us wait another hour- just to be on the safe side.
She was so sweet the whole time and just wanted to be cuddled with. I was happy to oblige.
On our way home, she wanted McDonald's fries and ice cream. We decided their fries are soggy enough they would be fine. She quickly consumed them all and started in on the ice cream cone. We had to stop her from eating the cone after we noticed several bites were gone. Lortab or not- that couldn't feel good.
Her recovery was better than I could have imagined. But, from what I understand, Dr Kelly is a master at smooth recoveries. Although, I have heard that for long term patients (like our friends who have a son with downs), he isn't the best. That being said, I HIGHLY recommend him for tonsils and adenoids.
The 4-7th days were the worst, but even those days weren't very bad.
Shared by Amy on 3/06/2010 10:15:00 PM

she looks so perty without her tonsils! i love that little mouse.

What a brave, sweet little girl!!!

Why did she have to have her tonsils removed?

Ivy continues to teach us all how difficult situations SHOULD be handled. What a sweetie.

Kat- she is definitely our little mouse. and if you want to see how pretty, she'll show you :)

Stephanie- Ivy has a fever syndrome that means every 3-4 weeks she gets a fever for 4-5 days. She's been getting them since her first birthday. There is an 80% chance that the tonsilectomy will cure her. Fingers are crossed.

Mom- Ivy always seems to be the example of how we should respond. now if only I could really follow her example :)