I take the pictures and Scott photoshops them.
This is one of the things that I love about Scott. He never backs down from something that interests him- even if it's challenging- and then he makes it look easy.
He saw a picture like this of a guy doing a flip over the wake, and it described how to edit it in photoshop. So he challenged me to hold still and take several pictures of him jumping the wake. It took me several trips to really hold still. Even though I thought I was, I found out that I was naturally following him. This last time we went out, I did it. I held still. Of course the time I did it was also the time he took a header.
Hopefully we can do more of these pictures, without him crashing. He also mentioned that I need to slow down my continuous shooting mode to 5-6 frames per second instead of the 7 frames per second as seen in the image below. 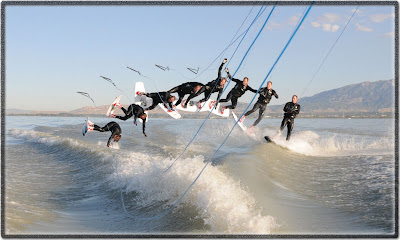