A Long Fun Day in the Sun

For the first outing with the Dodge's, we had beautiful weather. The sun was shining and the wind was no where near the lake.. The kids had a blast and every adult gave something a try. Here are a few of the faces from the day at the lake... 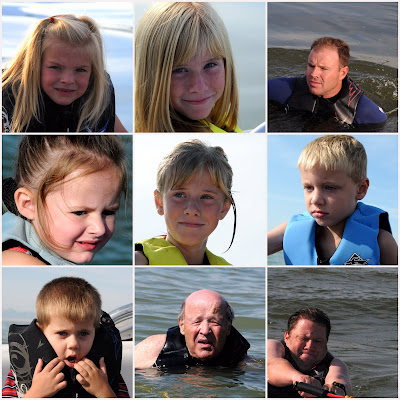 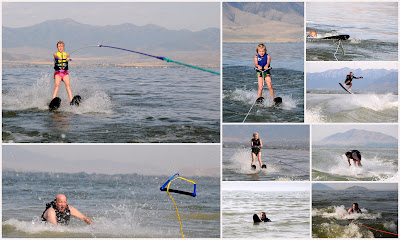 Emily, our niece, gave water skiing a try for the first time. She was a bit hesitant to give it a try, so Grandma Janet promised that if Emily got up, she'd water ski. Emily's first run ended quickly, as did her second. But the third run was a winner and she got up and went a ways. Behind me, I hear, "Oh crap!" from Grandma Janet. She knew that Emily would let her off the hook but that her children would NOT. So Grandma Janet strapped on the skis and went out for a quick run. She popped right up and showed Jade that she could do the one handed Miss America wave as well. Bob and Kristal both gave slalom skiing a try, because it was what they did in their younger days. Neither made it up. Kristal gave wake boarding a try and she was a natural. 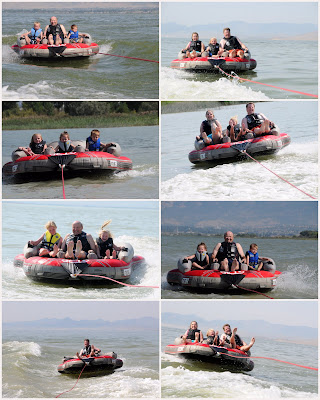 The tube was a huge hit. Mike really wanted Scott to throw him from it, especially after hearing about Theresa's launch earlier in the week. I think Scott could have thrown him if he would have been in one of the side seats, but in the center it was just too balanced.
It was a wonderful day on the lake.
Oh, and by the way, I did try wake boarding again. After watching the videos and going through the steps in my head, I was able to get up. I rode for a VERY short time and then allowed myself to crash. Not because I was tired but because I had no idea what you are supposed to do once you get up. Do you stay in the middle of the wake or do you venture over the wake into the water that appears to be so smooth? Do you lean towards your toes or heels to turn? I really had no idea what to do next. Guess I'll have to watch more videos or just gear myself up for the next steps.
One of these days I am going to do a post all about how good Scott is on the water. He is constantly amazing me at the things he is able to do.
Shared by Amy on 9/03/2009 11:28:00 PM