First off, I have to say I am really starting love my neighborhood. There is still a list of things I don't like, and one of these days, I will post a favorites and a not-so-favorites list. I'll give you a sneak peek at one item that will be on one of those two lists... a two story chicken coop.
In our neighborhood, there is a "gang" or a "pack" of boys ranging from 4-10 years old. They cruise the neighborhood on their bikes and scooters, making stops to play at each of their houses. Sometimes, this little group of boys will come by and include Jade in their activities. As you may know, Jade is a bit of a tomboy. You will find her doing WWF smack down with the guys on the Hawkins tramp, or having a battle on the grass with one of them. If she loses, don't expect to hear a girlie cry- you can bet that Jade will be up in a jiff, trying again to take them down. Oh the things that make a mother of a daughter proud.
The other day, Jade had a girl friend over. They had decided to color and make cards for each other. (A girlie thing to do). Then there was a knock on the door. Two of the younger boys in the pack were asking for Jade. They told her she needed some money because they had a candy/lemonade stand. With Ivy and her radar for sweets, I gave the 3 girls each a dollar and we were off to the stand. 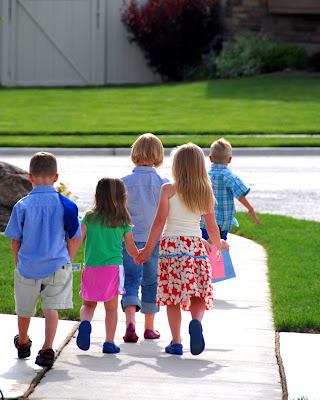 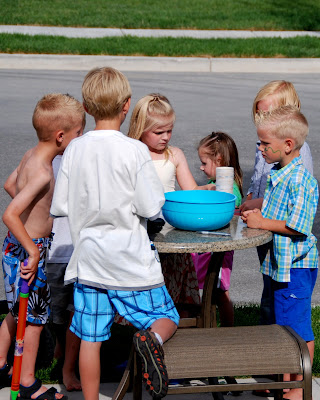 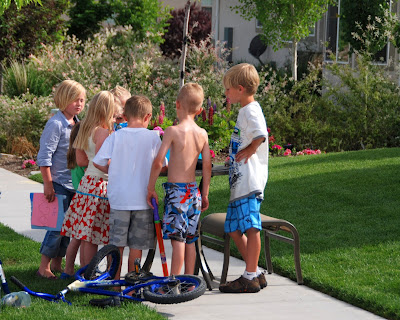 While I sat and visited with Kim and Lisa, I started to feel like this neighborhood is getting more and more like the neighborhood I grew up in. Sure, there is a little more traffic, the block where we live isn't full of kids in each house, the kids have to walk farther than earshot to play together, there are a few houses on our street that haven't considered doing anything about the 4 foot weeds covering their front and back yards and there is a chicken coop in the back yard of our next door neighbor, but it is definitely starting to feel less temporary.
Now to get Jade to remember that she is a girl and wrestling with the boys and yelling at them that only one boy can wrestle at a time doesn't fall under the "I'm a lady" umbrella.
Shared by Amy on 6/07/2009 08:37:00 AM

How cute! I love the neighborhood feeling! Jade is such a cutie!