Another night of firsts...

On our first Friday night with the boat, we took our nanny, Kim and Scott's brother's family on the boat for the first time.
It was the first time Scott threw someone from our raft.
It was the first boating injury.
It was Jade's first time getting up on water skis.
Now a little bit more information about the firsts...
The kids all took turns on the raft and they enjoyed bouncing up and down as Scott would maneuver them over the wake. Then Theresa went with some of the kids. The extra weight of a grown up caused a bigger bounce- which proved to be too much bounce for little Ivy. Kim traded Ivy places- putting two grown ups and one kid on the raft. This made for some serious bounce- enough bounce that it launched Theresa right off. She bounced and Jade bounced and Kim bounced. The injury came from Jade bouncing her head right into Kim's forehead. By the time she got off the raft and onto the boat, there was a large golf ball sized bump on her eyebrow. She was a great sport and said that injuries happen when you are putting yourself out there having fun. I completely agree with her, but I thought she was great about her injury.
Luckily, everyone was able to laugh and we didn't have to take anyone to the emergency room. And Kim had a great story to tell on her date the next night.
After we played on the raft/tube for a while, we had to take cover from the wind and rain storm. It was cold and an adventure. 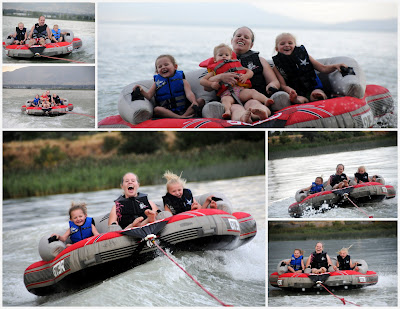 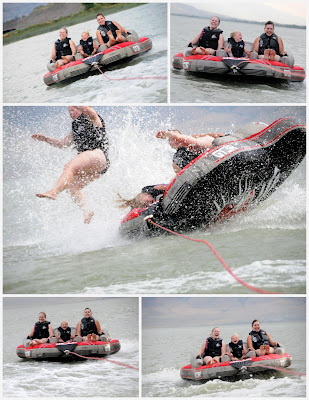 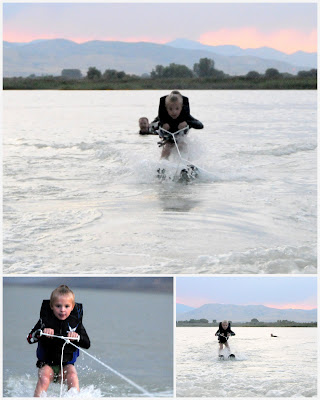 As I have said before, Jade absolutely amazes me with her athletic skills. She is able to do anything and everything she tries. Peter, her cousin, had to do a lot of coaxing her into the water, but she did it. And once she got in and got used to the cold she let Scott help her get up. Once she got going, she did great and was excited to try it again.
Shared by Amy on 8/29/2009 10:17:00 PM