The 4th of July Andrus/Christensen Gala- OH MY! About thirty years ago (that's as far back as I can remember), we started having very full 4th of July's. We would start out at 9 AM by heading to the parade. The Bullock's (family friends) grandma lived by the parade path,so they would save a section for all of us. After the parade was over, we would go to Doc and Grandma's house where we would play in their pool and have lunch. After several hours at the pool, we would all return to our homes, rest and get ready for the evening. Early evening we would gather at my folk's for water balloon volleyball (okay the volleyball didn't start being part of the festivities until we were a little bit older) and relays. My mom would create little games and the competition was pretty light hearted. As we got a little older, the games got a little more aggressive and more difficult- but always very fun. Once the games would end and we'd dry off from the water fight, we'd have a yummy bbq. When we were little, it was Doc's super terrific steak. As we got older, the steak went away and was replaced by my dad's bbq country cut pork loin. We always had Grandma's potato salad and her baked beans. After Doc and Grandma started to get older, we- the grandkids- started to take on some of the food assignments. I think I was 14 when I started making the frog eye salad. Sari used to joke that she wanted a great big wading pool of it at her wedding. I don't think she was actually serious, but a nice compliment. Once we were done with the food, we'd load up in the station wagons and head over to the apartments where my parents used to live. From there we would watch the Stadium of Fire fireworks. Ah what a fun day the Fourth has always been.
Over the years the Fourth of July party has grown and the attendee list has grown with it. When we were young, it was just the 14 members of the family. When we got a little bit older, the Bullock's started to join us. Once we got older, we would invite friends to join us. Then the "kids" started to get married and the permanent group got a little bigger. "Stratton" has been included now for about 13 years, the McBrides have been with us for about 15 years, the Cochran's have been a part of the party for about 10 years. (Please submit any corrections in the comments).
In the late 80's-early 90's we started to wear matching shirts. Uncle and Cass were the artists for the first few years, and then we started silk screening. Cass and Dan have created the designs, Uncle has designed many of them, my mom has designed several, even Josh and I took a turn. This year's shirt was designed by Kat and has been used as the logo on all printed materials. (Yes, there are printed materials). Doc and Grandma moved into a condo, so we started going to the BYU motion picture studio for lunch and games. Then Aunt and Unc built their beautiful home with a pool, so the afternoon activities moved to their house. The next year, my folks moved into their beautiful home and the two couples were wise in their planning. They bought lots that were adjoining, so now there is a gate between the two houses. This final move, meant the festivities could start at noon and continue until late in evening with plenty of room to roam and play.
The simple relays that used to take place in my folks backyard, have grown to a very large production that includes a shiny trophy. One year we did a scavenger hunt that took us all around town. Another year we did Survivor. This year we did "As Seen on TV" with games taken from 3 different reality shows. There is always a theme, there are always charges of cheating, there is always water and there is always a winner. To date, I have not been on the winning team. Maybe I should be a coordinator not a player. Either way, it is a LOT of fun and very serious. 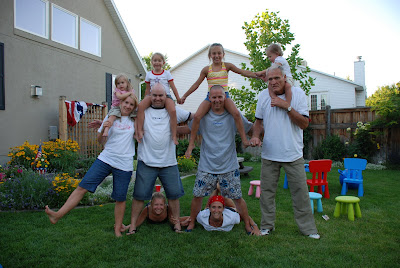 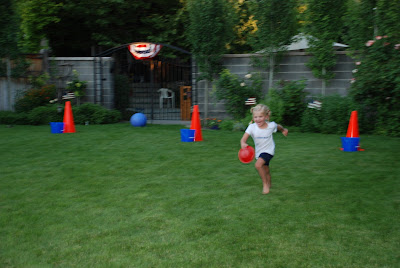 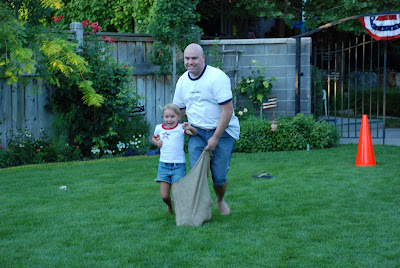 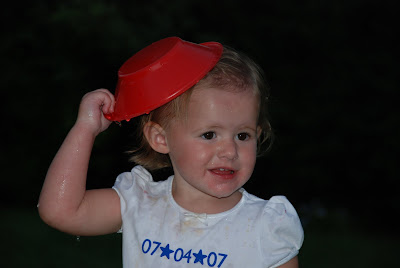 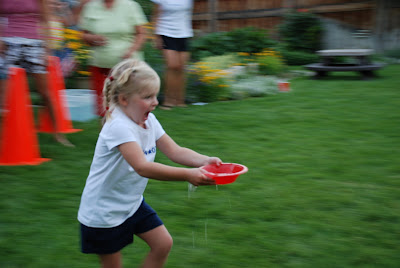 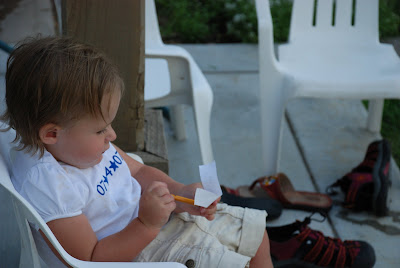 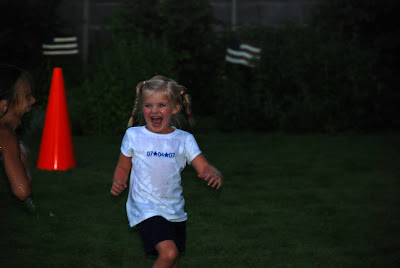 Eventually we did away with the drive down to Provo to watch the Stadium of Fire fireworks. (We weren't very old when we quit going to the apartments to watch). About 7 years ago, the "Cul de Sac of Fire" was started. Call me naive, but I thought we actually came up with that title. I guess I was wrong as I have heard of many "Cul de Sac of Fire" events going on. Anyway, this portion of the day's events takes place in the Christensen/Lee cul de sac. It started out as a simple firework display. Each year it has grown a little bit. There was a theme song added one year, choreography for the "lighters" another year, a refreshment tent the next and this year there was an intermission with TWO musical numbers and a painted logo on the street. This year was by far the biggest celebration to date. Next year, who knows what will happen during the event. Your guess is as good as mine, but I'm sure it will be FANTASTIC.
I really do love our family and I love that we have remained close for so many years. For 36 years now, my family of 14, have been my best friends.
Happy Fourth of July and I can't wait til next year!
For more posts concerning the holiday, check out Cassie's, Sari's (part 1, 2 and 3) and Em's blogs. I'll add Kat's as she posts them. For now, she's the only one who did the parade, so here's her post on it.
About thirty three years ago my mom's parents moved from California to Utah. They built a beautiful home in the same stake as my parents. Shortly after that, my aunt and uncle moved into the neighborhood too. Because all three households were so close, we got together for every birthday and every holiday. We loved growing up so close and we have continued these friendships as we have married and had children of our own. Okay, I digress. We're talking about the 4th of July right now.
Shared by Amy on 7/08/2008 05:48:00 PM

Email ThisBlogThis!Share to TwitterShare to FacebookShare to Pinterest
Labels: Holiday

SWEET!!!! looks like you guys had a ton of fun! What an awesome way to spend the 4th!