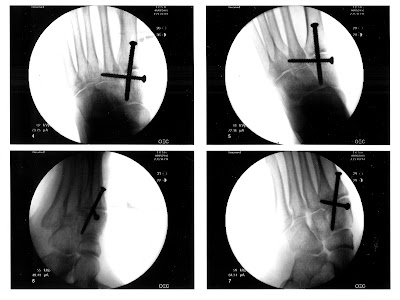 Here are the latest pictures of my foot. Can you get over the size of those screws? HUGE! I have to tell you it hurts today more than it has the past 4 weeks. Yes it's true- tomorrow it is 4 weeks since I did this silly injury.

Here's the timeline for recovery...
In two weeks I'll get the stitches taken out and a new cast put on.
For four to five weeks after that, I will be in a cast boot and will not be able to put any weight on my foot at all. That means I can't even put my foot on the ground without body weight.
Over the course of the next three to four weeks after that, I'll be put in a walking boot. Once I have that on, I will be able to gradually put weight on my foot.

Honestly, who would have thought that stepping off the porch onto a garden hose would cause so much drama. After all is said and done it will be SEVEN months.

Hi this is Aimee Jardine, Dave told me you blog website a while ago so I could see some 4 wheeling pictures and I'm finally checking it out :) Wow I can't believe those screws!! Really if you need anything I am just down the street. I hope your poor foot feels better soon!

Those are HUGE. And I'm still giving you a year to recover....completely. So sorry it's still hurting so much.

Unbelievable! I'm so sorry that you have to go through this. . . Do you get to keep the screws after? Because no one will believe how gigantic those things are!

I can't even begin to describe how not-right those x-rays look... It hurts my feet and makes my teeth curl to look at those gimungous tenpenny nails imbedded in your feet.

This reminds me of my co-worker, Dave, who underwent open head surgery in January. Doctors removed something that would, presumably, have killed him, and then screwed, stapled, and taped things back together. A few weeks later Dave's wife was poking around in part of the incision that just wasn't healing correctly, and with tweezers she removed two (two!) loose screws from the top of his head! I kind of think they were smaller than the deck-screws they used on you. Regardless, Dave feels much better knowing that he no longer has any screws loose...