For as long as I have known Scott, I have known that he would one day have another boat. I knew that, and I still married him.
The past month or so, Scott has been spending some time researching boats, sending me pictures of boats, taking me to look at boats and dreaming about taking his family out on his boat.
Scott's cousin, Ryan, has a brother-in-law that is a car dealer. Every month or so, he goes to the car auction in California. (I'm not sure why in California- maybe it has to do with the cars are in better shape because they don't have to deal with Utah weather). Anyway, the car auction is also a boat and toy auction.
One day, Scott sent me a list of boats that would be at the auction. There were several that were the same brands as boats that he had shown me. There was one MasterCraft. On the auction list, it said that it was a 2003 x30 and that it was YELLOW. Yellow is not a color that we had even considered, but decided that we would be okay with- if we won the auction.
That night we talked about how much Scott was willing to pay for the boat- depending on the condition and the upgrades etc.
The next morning, I got a picture of a boat in my email. It was a picture of "our" boat. This boat was a screaming deal. It is a 2003, but it only had 26.6 hours on it, plus it had the upgraded engine. I think it's an 8.1 with 450 horse power or something like that. Anyway- it was a huge upgrade. And, Scott got it for way below blue book.
The next day it was delivered to our doorstep. It's beautiful and apparently, we are now a "boating family"- something that I never thought I would say- well, at least before I met Scott. 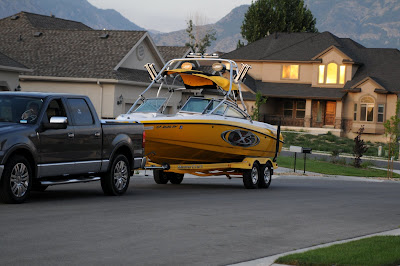 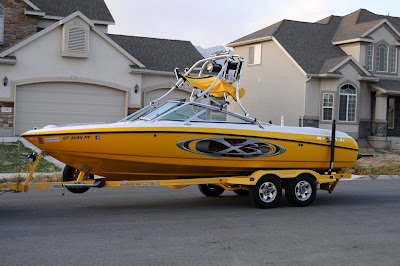 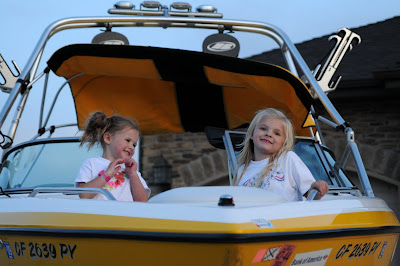 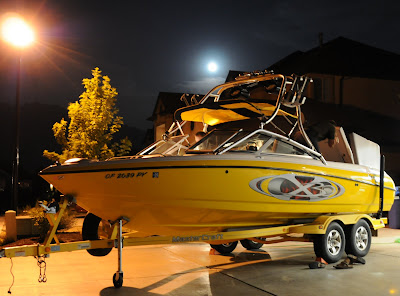