The boys and Brighton...

On January 2nd, Scott took my nephews and our friend Austin to Brighton. The night before, they gathered all of their gear, some was rented from Park's Sportsman, and prepared for a day on the slopes. Dax and Scott went grocery shopping and the boys agreed to eat whatever Scott and Dax picked out. Then the three of them spent the night at our house. There was a lot of XBox playing before Scott decided 1 AM was a reasonable time to call it a night.
7 AM came quickly and the boys awoke a little dazed and slow. Eventually, they got moving and were out the door- with full bellies and cold weather gear.
Austin has boarded for years, Dax spent three days boarding earlier this season and Mac had a half day lesson last year. So, the foursome headed up the mountain and decided the first run should be a difficult one. Dax and Austin ended up having a great day. Scott did something to his foot and Mac wasn't up for many runs, so the two of them took it a bit easier.
Scott got some fun video of Dax and Austin. I've taken some still from those videos and posted them here.
I hope the boys had fun. Scott always has a good time playing with the boys. Dax has made huge improvements from last year- it's amazing what a little confidence and practice will do for you. I mean, come on, the kid bungee jumped off of one of the highest bridges in the world!
The first picture is of Austin helping Mac with his bindings. 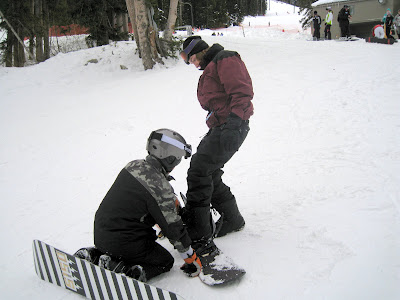 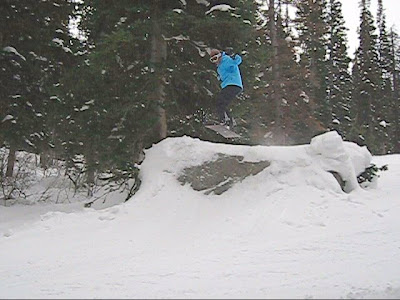 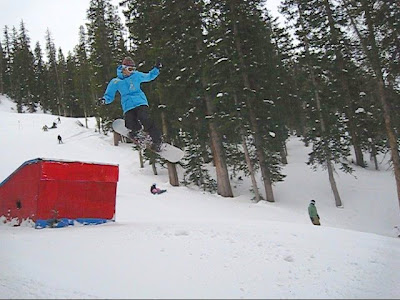 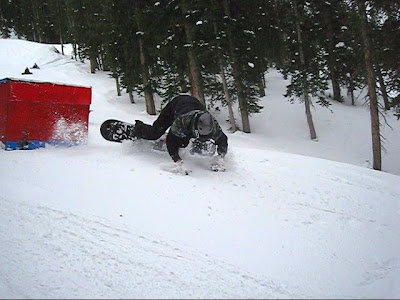