Sunday night games with the Sanford side of the family... 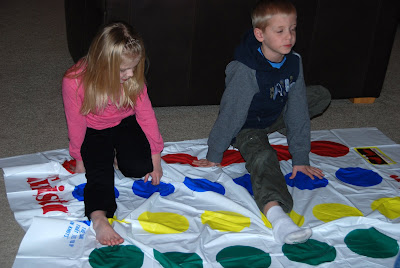 Sunday, we had both of Scott's siblings and parents down for dinner. We played games, had spaghetti and had some good conversations. The kids had a blast- as always. Some of the games they played were Twister, Blokus and Wii- plus all of the toys in the playroom.

It's so much fun having both of Scott's siblings living near by. I wish Tom and Anne lived near by so that we could do similar get togethers with my side of the family.

With the new year, now fully in swing, I'm looking forward to spending more time with the family- doing things that strengthen relationships and build memories. This year, I'm excited to have several gatherings and dinners at our house.
Shared by Amy on 1/24/2009 09:04:00 PM