At the beginning of the year, I said I was going to do a better job of living in the moment. By living in the moment, I hope to capture some images of my girls that documents each of their personalities at this stage in life. On Monday, I think I got some of those moments.
Ivy, finds little pleasures in every activity. While Jade was riding the four-wheeler, Ivy entertained herself by playing with her shadow on the stairs, more shadows in the snow and by attempting to pick up snow with her gloves. 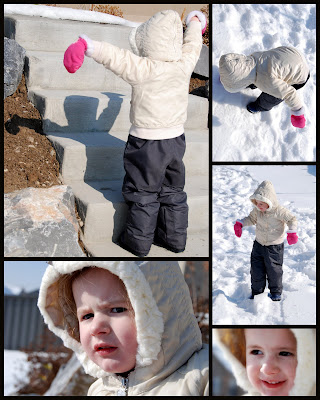 While Ivy was riding, Jade broke icicles off the trampoline and walked in the tracks from the four-wheeler. Oh the simple pleasures of being a kid. 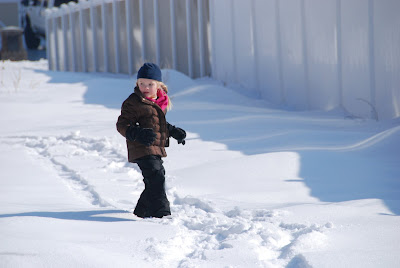 The girls had such a great time riding for the first time. The snow was a little soft and they were frequently getting stuck and lifted out by dad. We don't have them in helmets- not because we are irresponsible parents, but because we wanted to make sure they heard every instruction Scott gave them while they were learning. 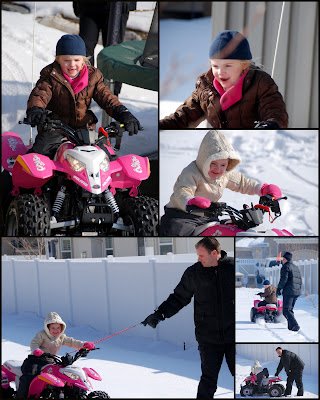 After the lessons were over, the helmet went on. Jade got to ride her four-wheeler on 3 different occasions Monday. I think she would have been begging dad to let her ride more but he ended up working the bulk of the day. 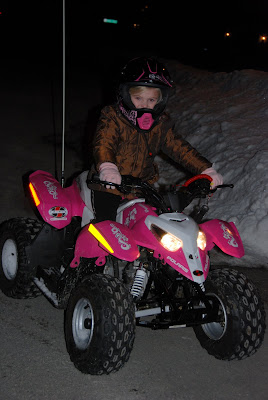 love all the pictures. we love enjoying the moments we have with your girls too!

What adorable girls! I love the photo of Ivy playing with her shadow on the stairs. That pink four wheeler is a riot. Barbie can eat her heart out!