Christmas time is such a wonderful time of year. It is so fun to do all of the activities that we try and fit in during such a short period of time.

The season starts with the Johnson family Christmas party. Every year we go up to Uncle Dale's church for a family dinner, carols and Santa. There are always a couple families that don't join us, but for the most part, everyone tries to come as often as possible. 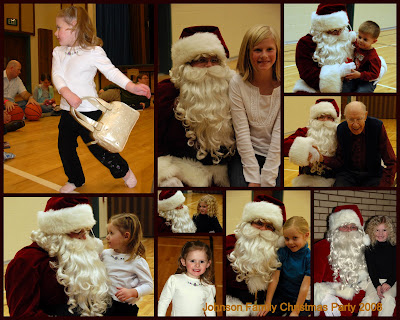 This year, Scott and I were able to host the Sanford family for Christmas eve and Christmas day. Scott and I both had to work during the day on Christmas eve, as did Kristal and Mike, so we kept the menu very simple. We had two kinds of soup, Cream of Potato and Chicken Noodle. (I'm sorry, no recipes to post because I didn't measure anything and just added to taste. Next time I make them, I will do a better job of measuring). Theresa brought really yummy mini BBQ bacon wrapped wienies. I'll have to get the recipe from her, because they were a definite hit. Kristal brought her crab dip- which is always very good and quickly devoured. I believe I do have that recipe already, so I'll see what I can do about posting it with pictures. Grandma and Grandpa brought a smoked salmon and a veggie tray. There was more than enough food and no one spent their whole day in the kitchen.

As I already posted, Scott's family video was a hit. The girls have watched it a number of times since. After we finished watching the video, we all sang carols. Ivy started asking if she could go to bed around 8:00 so we didn't keep the party going much beyond that. Which meant no Nativity re-enactment, no reading of the "Night Before Christmas" and no desserts. (We saved those for Christmas afternoon). 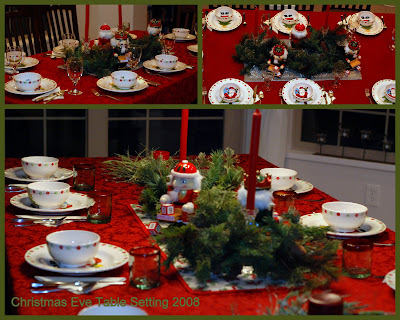 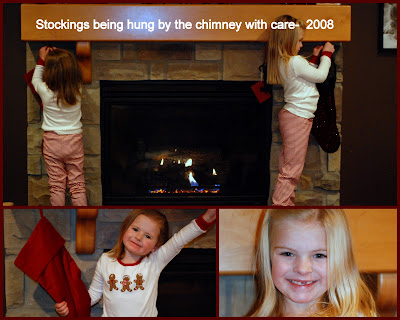 After everyone went home, Santa dropped off the girls PJ's, I read the "Night Before Christmas" to them and they hung their stockings. For some reason, I felt very rushed trying to get the girls to bed, and I don't enjoy feeling rushed. Pretty much, what it meant was that I didn't get a good picture of the kids standing together holding their stockings. 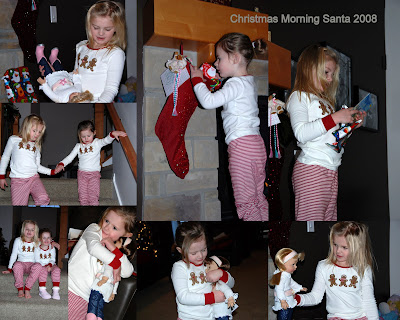 In the morning, we took the traditional on the stair picture, and started with their Santa presents and the stockings. The girls got the Madame Alexander Girlz dolls that they asked for. They also got an outfit to go with it. They loved it and had a great morning. Finally they asked if they could open up the rest of their presents. 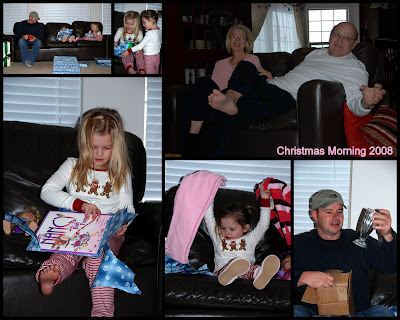 They had a great time opening their presents and were very sweet and grateful for everything they opened. 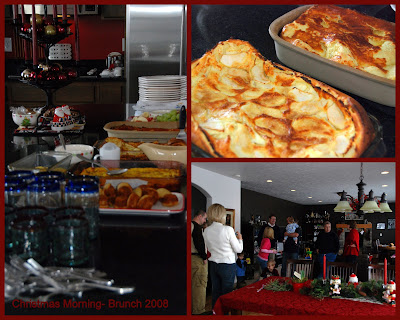 Over Christmas eve, we got about 5 inches of snow. Scott spent a while blowing the snow, and we waited for everyone to arrive. We knew the roads would be rough so we planned on everyone being late. Just before Trevor and Theresa arrived, we got a phone call from Mike and Kristal, they were stuck in their driveway and had been spending the past 45 minutes trying to get out. Scott and Trevor headed over to help them but by the time they got there, Mike and Kristal had arrived at our house.
We had Puffed Pancakes and I had to take a picture of them before everyone arrived, so that they could see how they looked straight out of the oven. Kristal brought really yummy eggs and Theresa brought fruit with a sweet dip. Both recipes I will get from them and post soon. 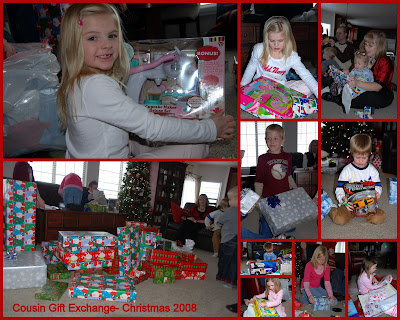 The cousins all exchanged gifts and spent the next half hour playing with their new toys. Jade got a cupcake maker from Grandma and Grandpa. We heard about it every hour until we let her use it and make cupcakes. Ivy got a play doh ice cream maker and she constantly asks to play with it. Ivy is so easy to buy gifts for- play doh, dress ups, or dolls.
We had a great Christmas day and loved everything we got. I can't wait to play the new game called Righteous that Trevor and Theresa gave us- but I'm afraid of losing. Bob and Janet gave us a beautiful bowl and platter, and a crescent wrench set, among many other things. They way over did. Mike and Kristal gave us my shampoo and conditioner- I love it and I feel very pampered.
The day after Christmas, we headed up to see Grandma E and Grandpa Wayne. It is always so good to see them. They are so strong and such troopers. Grandpa is 95 years old and drives himself everywhere. Grandma E has had a very difficult past couple of years, but she continues to be a fighter. She had bypass surgery and had some infections. For Christmas, they gave our family a train set. The girls and Scott are very excited about it- I like it too.
While they were setting up the train set, Grandma E and Grandpa Wayne shared some cool family history with us. Grandma E's mother wrote the pageant that they do every single year at the Golden Spike Anniversary. That was cool history to learn, but even cooler was that Grandpa Wayne has performed in it every single year since it debuted. This year, we will have to go up and watch him. He gets all decked out in a vintage tux and a top hat. I am going to have to start doing some investigative reporting to find out other neat things about the Sanford/Johnson history. 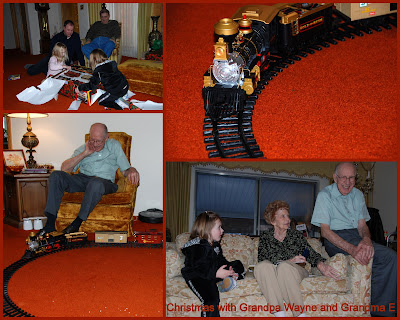 Amy, your Christmas sounds so wonderful. Your kitchen and table look like they came from a catalog. So beautiful!