Things to know about getting sick at Disneyland....

Mickey's Fun Wheel is really a thrilling ride. It's one of those rides that leaves little ones wanting more (it was one of Ivy's favorites). It leaves adults looking for the "barf bags" on the side of the carriage.
Anne and my dad took all of the kids on the ride. The ride is vicious!!!! Anne was calling my mom during the ride letting her know that Dad wasn't doing well. Ivy would be "weee-ing" and giggling and would stop to check on Grandpa. By the time the ride was FINALLY over, Dad was not doing well. Anne hurried up to let us know that dad was really bad. I went over to him first. He was as white as a ghost, ice cold and soaking wet. By the time Tom got over to dad, he was doing worse. Tom grabbed my dad just as he went out. Dad went out two more times while Tom walked him to the bench.
Mom went and told someone that dad wasn't doing well and needed some help. No one came. She went back and said that she could call 911- so someone came and checked on him. Minutes later there were two nurses running up to take care of him.
Disneyland cast members formed a barricade around my dad and the nurses. 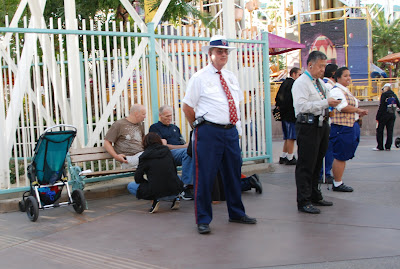 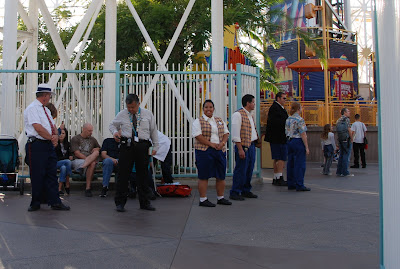 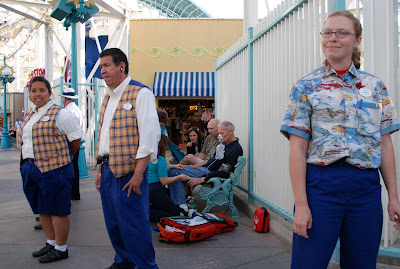 After the paramedics had come and been sent a way, the took Dad to the first aid room. He spent the next couple of hours resting. 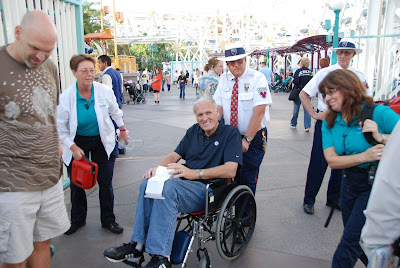 Disneyland really does everything they can to maintain the happiest place on earth.
Oh the things to know...
1. If you need help- ask with panic and fear in your voice/actions. If you go calmly, they won't hurry.
2. In California it is against the law to take pictures of someone being medically administered to.
3. The first aid room is up above the tortilla factory.
4. If you are going to die- it won't be at Disneyland.
5. If you get as sick as my dad, they will give you a free wheelchair pass.
6. If there is a barf bag in the ride, and you get motion sick, get OFF the ride before it starts.
Shared by Amy on 12/02/2009 10:07:00 PM

Wow! Not fun at the time. How did you find out item #2? That's nice they shield the patient like that.

I found out as I was getting scolded. :) After I told them it was my dad, I still got dirty looks.

I definitely skipped Mickey's Fun Wheel because I have a propensity toward motion sickness. I stay away from anything that spins, sways, or rocks. Speed is okay, but going round-and-round is not.

I'm so glad that your dad was able to recover quickly!